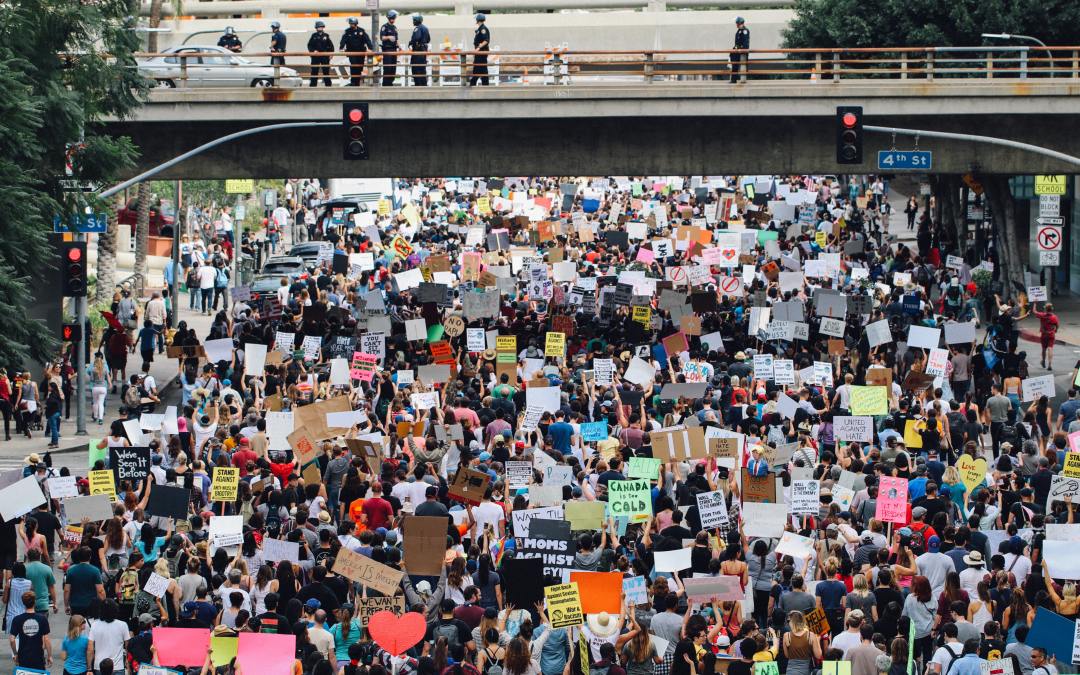 Note: This blog was written in March of 2019 on Trevor’s personal blog site. A few updates have been made in terms of the framing and language, but it is largely unchanged to accurately reflect what occurred in his classroom.

Discussing current events in our current sociopolitical reality can be a prickly prospect. However, it’s also never been more important. Regardless of what we believe, validation and affirmation are only a few finger taps or keystrokes away. The distance between us keeps growing farther and our echo chambers keep growing louder. The cultural, political, and religious stories we’ve always believed in are becoming increasingly fragmented, like (to borrow an analogy created by one of my students) a mirror that’s being shattered again and again, endlessly distorting our understanding of each other and ourselves. I felt that image beautifully captured the current state of isolation, fear, and confusion that define modern social and political life. And yes, a sixteen-year-old came up with that, not me. It’s crazy how wise they can be when given the chance!

My state’s standards ask me to discuss bias, best research practices, and media literacy. I’ve always found these terms rather squishy and as a result I felt a lot of the materials I’d created and curated the last few years felt out of date, reductive, or contrived. I wanted to do better. I wanted to make certain that my students are equipped with the tools needed to navigate modern media landscape, so I made it my mission to revamp how I did current events. This is a work in progress (and one piece of a broader concept based unit) so all constructive criticism is welcome!

The unit is broken down in to five phases, which I’ll be sharing in a two-part post.

(Coming in Part 2 of this blog)
Connect Phase: Apply knowledge of bias and narratives to analyze current events
Transfer Phase: Articulate the relationship between bias, narratives, and media

This post will detail how I scaffold my discussions about current events and provide some activities, resources, and tools that will hopefully help you do the same!

NOTE: This Prezi contains all the activities and directions covered in my post.

One of those questions is not like the other. When one considers the finite sliver of time humans have had unfettered access to information in comparison to the amount of time it takes for our brains to evolve, there’s a cosmic chasm. The graph above, which has had to condensed for spatial purposes, illustrates just how rapidly we’ve advanced in such a relatively short amount of time to any previous period of human history. This means our cognitive hardware isn’t even remotely equipped to run TheInformationAge.exe. Although these cognitive functions have kept us safe for thousands of years, our brain is hardwired to protect us from saber tooth tiger attacks, not make us reflective digital citizens, and that can have some serious side effects. These evolutionary mechanisms are the universal natural biases that we all share, as opposed to the nurtured cultural biases that make our perspective unique, but more on them later.

Here are the eight cognitive biases we focus on, as detailed in Adam Hansen’s excellent book on “How To Outsmart Your Instincts.” Though written more for innovationistas than classroom teachers, it’s chock full of insight on the effects of bias on our thinking. You can find their definitions on my Prezi.

These terms give us the vocabulary to name, identify, and articulate our bias. More important still, it allows us a safe space to concede we are all susceptible to bias. It’s just the way our brains work. It’s a great equalizer that allows students to challenge each other’s thinking in a way that doesn’t feel like an attack. Since we’re all guilty of falling prey to our cognitive biases, it carries less shame when called out. Thus far, it’s helped my students and I navigate some ideologically rocky topics in ways that helped keep conversation honest, open, and accountable.

I start with a quick hook activity exploring what I call the “Solving the Divisive Questions of our Time” where students had to debate silly pop-culture flashpoints like yanny vs. laurel, the black/blue, white/gold dress, and the ever popular is water wet? This gets students arguing, yelling, and generally creating an atmosphere filled with noise and bluster, but devoid of progress. (I call it my Congress Simulator).

I then do my best Bill Nye to break down the science behind how we perceive sounds, images, etc. differently. Really though, the goal was to explain that the reasons behind why we perceive things the way we do is infinitely more complex than we first believe, and only by examining that process can we arrive at any real understanding of truth.

This quick little tale is how I introduce the idea of culture to my students. Like the water the both fish swim in, culture shapes our lives and experiences, even though we’re not always aware of it. I also should note that I’m using the term culture loosely here, as any group, no matter how small, has norms, expectations, and unspoken rules that govern it. In addition to the immutable cultures that shape us, like those based on race, gender, and ethnicity (which obviously influence our experiences), there are a multitude of smaller sub-cultures that also inform our views: regional culture, generational culture, nerd culture, gamer culture, jock culture, hip-hop culture, ballet culture, military culture, etc. The point of this is, though our cognition is the same, our cultural makeups are different and, as a result, we all have different perspectives. Acknowledging this a necessary step to productive class dialogue.

The aim is to have students see themselves and each other as unique individuals, but also as people whose perspectives are shaped by the groups they were born in to and/or choose to identify with. Empathy is key. I think, whether we do it consciously because we fear uncomfortable dialogue or unconsciously out of habit, it’s easy for teachers to universalize the way we talk about the human experience, without acknowledging the cultural differences. Though many aspects of the human condition are universal, we’d be remiss (in my opinion) to dismiss the how past/present systems and norms affect students differently depending on their race, religion, gender, etc.

In order to get students reflecting on culture I introduce them to the concept of culture through this great resource from Mixed Mental Arts. Then groups answer the following questions and have to whiteboard their answers as a table.

I then have them record a “cultural confessional” on FlipGrid where they pick a culture that they feel has played a significant role in shaping who they are and why. They also had to comment on two other people’s grids and engage in a dialogue about similarities and differences. This lead to a ton of really great conversations about all the various cultural backgrounds students come from.

Some chose to keep it light and discussed the way various sports, clubs, and hobbies, have impacted them, while others deeply personal accounts of the sacrifices their family made to come to America. Some shared cultural traditions like food and garb from regions across the globe and others shared how being a transient military kid has shaped them. Many discussed how living in the uber-competitive Northern Virginia culture causes stress and anxiety they have to cope with. There was a pretty impressive amount of diversity of both topics and cultures discussed. All in all, it was great learning more about my students and having them learn more about each other too. Though not all of them were deep, there were quite a few moments of empathy and compassion between students that were legitimately touching.

Students were also given the chance to create a “cultural artifact” to share. There were some amazing videos, slide decks, poems, and short stories, but for the sake of privacy, here are some images I received that don’t have students’ names or faces.

By the end of this phase, students have acquired and consolidated their understanding of the unit’s second anchoring concept: cultural bias.

I could yak forever about the power and utility of stories, but for sake of brevity, I’ll sum up the way I frame the concept of narrative for current events with a quote from American poet and political activist,  Muriel Rukeyser:

“The universe is made of stories, not atoms.”

This quote helps me frame the idea that stories dictate our understanding of the world at a “sub-atomic” level. Whether we’re over analyzing a text message from a friend or trying to understand globalized economic systems, we often take the limited information we have and connect/organize the dots in a seemingly coherent, narrative structure to make sense of  them.

Even if our data points are limited or our expertise non-existent, it’s easy to take comfort in the fact the way we’ve organized and arranged our disconnected bits of information in to a narrative that makes sense to us. Stories have an internal logic that we find comforting. This isn’t necessarily a bad thing, but it can lead to an incomplete picture of what’s really happening. It’s one, simplified, perspective-locked narrative in a world of stories.

By suggesting to my students that stories are a tool that helps us construct meaning, it’s much easier to challenge them to reconsider their beliefs. It allows me (and them) to ask the question, “Are you sure that’s true? Or is it just a story?”. This has lead to a lot of great conversations about how stories can create oversimplified, politically convenient narratives. I also recommend showing them one of my favorite TedTalks of all time, “The Danger of a Single Story” as it compellingly captures the risk of single, dominant narratives.

Whether I’m introducing students to a new concept, or asking them to re-evaluate one they’re already familiar with, concept attainment is a great tool to scaffold or extend understanding. I introduced the concept of narrative through the following steps, as detailed in my Prezi.

By the end of this phase, students have acquired and consolidated their understanding of the unit’s third anchoring concept: narratives.

At the end of the Acquire Phase, students will understand the individual concepts of cognitive bias, cultural bias, and narratives. In Part 2 I’ll discuss how I provide my students with opportunities to connect these concepts in relationship and transfer their understanding through connect and transfer strategies like articles of the Week, TQE discussion, and concept mapping.

This site uses Akismet to reduce spam. Learn how your comment data is processed.

What is concept-driven learning?

Learning for a Complex World